We are fortunate to have such a nice farmers market here in Downey. We often meet friends and neighbors, and over the years have come to know a number of the vendors.

This photo was taken from the parking garage, before the market was moved to Downey Avenue. 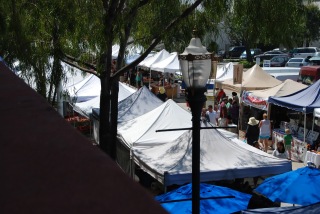 Here is a poem

The Weight: Written by Robbie Robertson and originally recorded by “The Band,” thie song has been listed by Rolling Stone as one fo the top 50 “greatest songs of all time.” It has been covered by some notable artists including Aretha Franklin. Amazingly, I had never heard her version until a we saw a band cover it last week.

Then this morning I heard it again …

Last year Carol and I met a young violinist whose family lives in China, but who has lived in Los Angeles by herself since she was a teenager while pursuing advanced music studies. She has traveled the world teaching and performing, and is the inspiration for this poem.